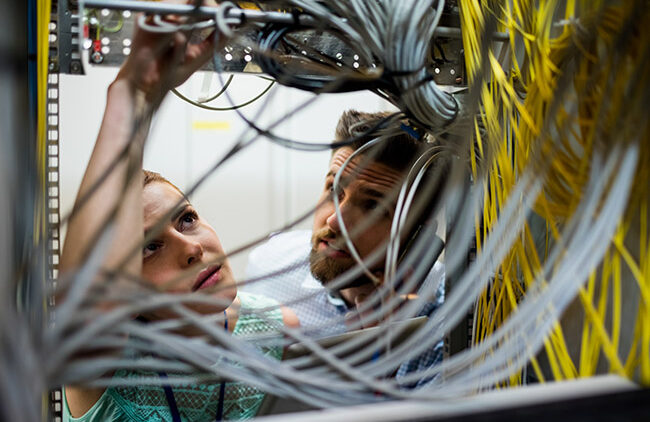 Introduced in 2003, PoE (Power over Ethernet) was only available for a few low-power devices and operations. Nowadays, PoE is one of the most rapidly growing applications for networking.

A technical standard, PoE lets Ethernet cables simultaneously perform the transmission of data and power over one network cable. Thus, network and integration system installers can deploy powered devices in areas lacking electrical circuits. As a result, PoE can help avoid the installation of additional electrical wiring and the associated costs.

The Institute of Electrical and Electronics Engineers set the IEEE 802.3af, 802.3at, and 802.3bt standards governing the way networking equipment should function, promoting interoperability between devices.

Devices that are PoE-capable may be PSE (power sourcing equipment), PDs (powered devices), or occasionally both. A PSE device transmits power, and a PD is the device being powered. The majority of PSEs are either PoE injectors or network switches designed to be utilized with non-PoE switches.

A great variety of enterprise tech and devices depend on PoE. These include access controls, desktop computers, IP cameras, industrial automation equipment, information kiosks, laptops, lighting, and WAPs (wireless access points). As digital buildings and IoT (Internet of Things) rapidly gain traction, PoE is on the brink of being massively implemented in enterprise applications.

In order to leverage the numerous PoE capabilities, network design for digital buildings is increasingly trending to the implementation of zone cabling architectures, rather than the traditional home run cabling configuration.

Founded in 1986, Progressive Office’s success has been a direct result of years of commitment to seeking cost-effective solutions. Working together, Progressive teams are committed to getting your data cabling, access control, and telecom systems installed and operating while minimizing disruption and downtime. Call our toll-free number (800) 614-4560 today.