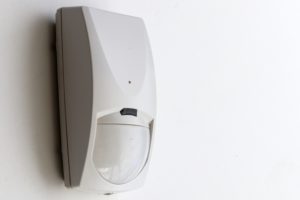 Using acoustic, microwave or optical technologies, motion sensors can be used for the detection of movement in commercial and industrial settings. Also known as motion detectors, they can significantly strengthen the security of buildings and outdoor premises by detecting unauthorized movements of individuals.

Although motion sensors have various types, they generally belong in two categories: active and passive.

There are several uses of motion sensors on commercial properties that will help improve security and safety as summarized by the following:

In large facilities, it is often a challenge to monitor restricted areas around the clock. However, motion detectors can be utilized in several ways for restricting particular parts of premises at certain times. For example, a specific area may be restricted from any sort of entry after hours. Any entry during a set period of time will sound an alarm.

After hours acts of vandalism or crime outside premises can be discouraged or stopped by motion sensors that immediately turn on security lighting or trigger very loud alarms. When an intruder enters premises silently, people nearby may not notice. Fortunately, even stealthy thieves, including those who are stowaways, will be unable to evade sensors designed to detect movement or infrared radiation generated by bodies. When a burglar passes a beam, an alarm will sound, summoning either security staff or police within minutes.

Lighting can be linked to motion sensors to automatically turn on when an individual enters a room or a hallway. This not only helps conserve energy, it will promote security and safety in areas that would otherwise be quite dark.

Motion sensors can be utilized to open doors after accepting the entry of a proper code or the use of a key card by authorized personnel. This not only improves the security of premises, it can make the entry of employees more convenient by eliminating keys, which can be lost or stolen and result in having to replace locks. In addition, the gates of parking lots can be automatically activated when a sensor detects the valid pass of an employee.

Linked by low-voltage Ethernet cabling, a motion sensor alarm system is typically made up of the chief components below: