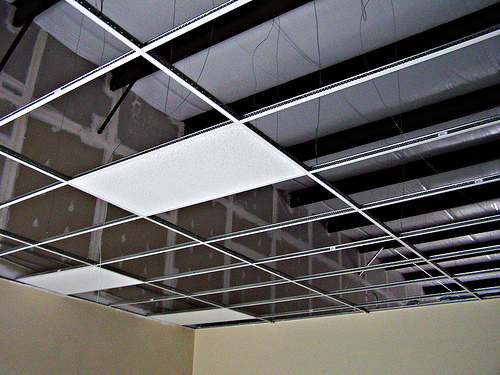 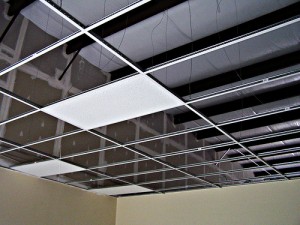 A drop or dropped ceiling is the ceiling that is hung below the main (structural) ceiling. It may also be referred to as a false or suspended ceiling, and is a staple of modern construction and architecture. The area above the dropped ceiling is called the plenum space, as it is usually used for the HVAC air return. The plenum space is also very commonly used to conceal piping, wiring, and ductwork.

A typical dropped ceiling consists of a grid-work of metal channels in the shape of an upside-down “T”, suspended from wires from the overhead concrete structure. These channels snap together in a pattern – typically a 2′ x 2′ or 2′ x 4′ grid. Each cell is filled with a lightweight “tile” or “panel” which simply drop into the grid. Tiles can be selected from a variety of materials, including wood, metal, plastic, or mineral fibres, and can come in almost any color. Light fixtures, HVAC air grilles, and other fixtures are available which can fit the same space as a tile. Most tile material is easily cut to allow fixtures in other shapes, such as incandescent lights, speakers, and fire sprinkler heads.

The suspended ceiling was originally developed to conceal the underside of the floor above and to offer acoustic balance and control in a room. The acoustic performance of suspended ceilings has improved dramatically over the years, with enhanced sound absorption and attenuation. This is sometimes achieved by adding insulation known as Sound Attenuation Batts (SABs), more commonly referred to as “sound batts”, above the panels to help deaden sounds and keep adjacent rooms quieter.