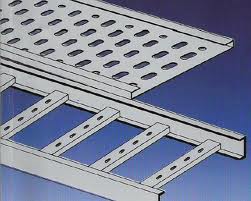 Cable management is an important function. There are numerous concerns that you need to consider regarding proper usage and arrangement. Having too many cables in a tray is a safety issue. It can also cause poor operational performance. And it can also make replacing and relocating a cable very difficult. So please refrain from overloading cable trays. Overhanging cable trays are mounted on ceilings or supported by a bracket at the bottom. Again, be careful because a heavy tray can fall.

Ladder trays are sometimes fitted with solid covers. They serve as protection

against dust or dirt, falling objects and water. Tray covers are also designed for outdoors and dusty areas. They are peaked to get rid of debris, grime or snow. Lighter cable trays are meant for a large quantities of small cables such as computer and telephone networks. These trays are usually fabricated from wire mesh described as cable baskets and are primarily installed under raised floors.

There is also a possibility that cables at the tray base can be crushed by the weight of the fixtures. This is more likely to occur with Cat6 cabling since it is thicker and heavier compared to Cat 3 and Cat5 cable. Cables which are flattened can lead to signal interferences. Also avoid hanging cables from the tray. Gravity will produce stress on the copper core. It stretches out and gets distorted over time. This can result in disrupted and intermittent signal.

Do not pull cables too hard. This can cause damage to the copper core. It causes stretching and thinning which affects signal performance. In certain instances, this can even unwind the twisted cables inside the casing. That is why it is important to use ladder trays in the ceiling and basket trays in the floor. Huge cables laid in the tray also need support blocks to maintain spaces between conductors and prevent overheating of wires. Smaller cables may be arrange in horizontal trays, or fastened at the underside of vertically mounted trays. Different clamps, support and splicing accessories are used with the ladder tray to provide complete functionality.

Cable ladder trays have distinct advantages over other systems. The tray is more affordable and reliable and it is adaptable to changing requirements. Moreover, the design does cause safety concerns which can be found in other systems. Make sure to choose the proper trays to avoid exorbitant costs and inferior designs. You should also consider the costs of installation and maintenance.