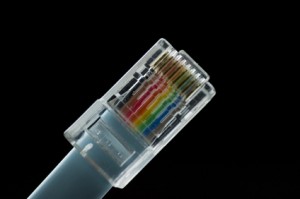 Lots of people have become so familiar with using WiFi at home or on the go, whether on a laptop, tablet or smartphone, they think that a hard-wired Internet connection is not needed anymore. WiFi feels more convenient and less cumbersome because you do not have to deal with cables. But you really should reconsider before making a decision to get rid of your Ethernet cables. Wired Internet connections do have advantages over wireless.

Ethernet connections provide for speedier transmission of data from the Internet to your computer. In addition, buffering lag is significantly less than WiFi. Wired also decreases the chances of losing a connection. For those who are concerned with protecting data, security is also easier to ensure on wired connections, decreasing the possibility of data breaches. These points are all crucial for companies that must process great volumes of data and cannot tolerate interruptions of connectivity.

Companies that must transfer big files via its LAN (local area network), such as a video post-production house moving 4K files of feature films to its facility’s server, typically require a hard-wired connection to perform efficiently. Keep in mind that the rate of speed that data can be transferred from device to device will not be identical to a network’s Internet speed. Its bandwidth is the limitation, the bottleneck that may delay data transfer over the Internet from your company to rest of the planet.

Before moving into a new office, ask an experienced IT professional to survey the space’s Internet connections. The workplace should have gigabit switches capable of carrying today’s data workloads. It would be frustrating to discover 10-100 Mbps switches that cannot handle modern bandwidth consumption. You may also have a VOIP phone system that requires hard-wired connections to function. In addition, your organization may have desktop PCs that require an Ethernet connection.