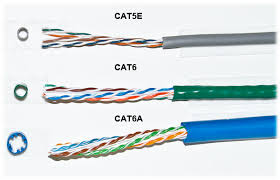 While WI-Fi and other wireless network technologies have improved greatly over the years, nothing beats the reliability and performance of a wired network in your home or business. One challenge that people face is what kind of cable they need for their needs.

Cat3 Cable is primarily for phone wire installation in homes and businesses; however it can be used for other purposes such as alarm system installs or other means. Most contractors prefer to use Cat5 or Cat6 for phone line runs as this allows them flexibility in switching a phone jack into a network jack and for potentially higher bulk purchase discounts.

Cat6 Cable: Cat6 network cable is the cable of choice for residential and business installs. Cat6 cable is designed for 1000 base-T [Gigabit Ethernet] or higher speeds, but works about the same as a Cat5, Cat5e, or Cat3 cable – with additional benefits.

Cat6, Cat6e and Cat6a are actually all very similar. The difference is: standard Cat6 “crosstalk” (signal bleed) between pairs occur because of external interference or “alien interference”. Cat6a solves this problem as it reduces crosstalk between pairs.