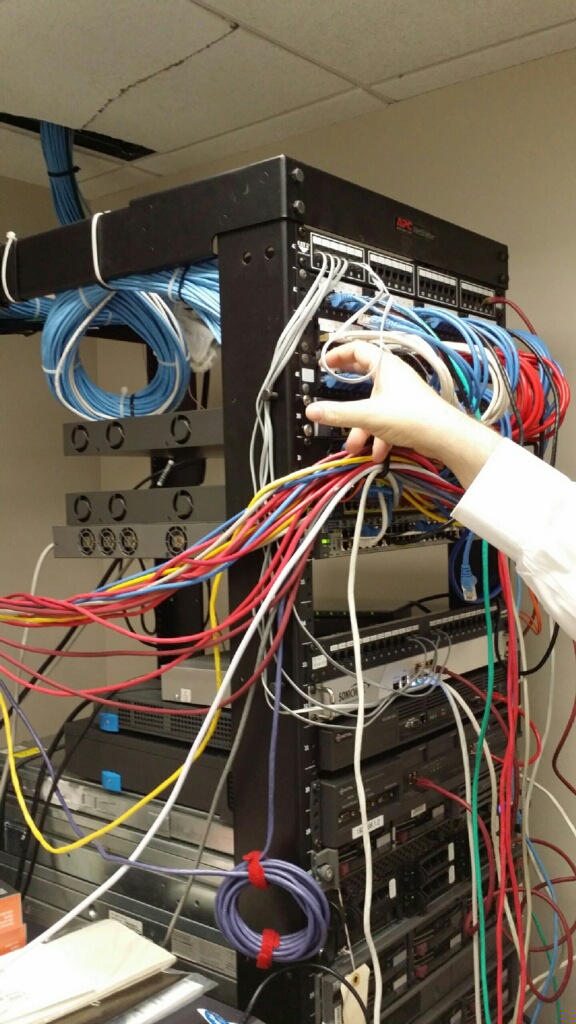 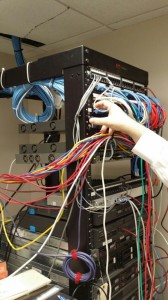 This is a photo of the existing rack and patch panels. We will be replacing the patch panels with three 24-port panels.

Cat6a is a much more established standard than Cat7. It is easier to install and has less connectivity issues. We are not going to recommend or bid on a Cat7 solution. Cat6a can run at speeds of up to 10-Gigabit so if that is acceptable for the next 10 years, than we recommend Cat 6a or go to fiber.

We were asked to bid on a cabling project that was fairly straight-forward. It involved replacing the existing Cat5e cable with either Cat6a, Cat7 or fiber cable. The site was an open, standard modern office with a drop ceiling and hollow office walls. The client needed 64 single drops to existing faceplates, three new 24-port patch panels and patch cables.

The challenge is in deciding on which type of cable to use. Cat6a and fiber are very standard solutions. But Cat7 is not  at all a standard installation yet (and might not ever be one). The problems with Cat7 are that the cable is very heavy, very expensive, prone to interference and it is difficult to terminate. And all of the cable connections need to be grounded. There is a newer Cat7f standard that is trying to deal with these issues. But, for now, Cat6a or fiber are the best options for a cost-effective solution that will yield speed and reliability.

Again, Cat6a is a much more established standard than Cat7. We are not going to recommend or bid on a Cat7 solution. Cat6a can run at speeds of up to 10-Gigabit so if that is acceptable for the next 10 years, than we recommend Cat 6a or fiber.

Cat7 should not be considered because it is not a highly established standard like Cat6a. So, there are too many risks. With all of these solutions, upgrades to switches and network cards will be needed in order to take full advantage of the new cabling speed capability.

Please note: Clients often misunderstand that buying a cabling upgrade alone will NOT offer them the entire bandwidth at every workstation. In truth, the new cable will only yield the full speed if every single component in the network (including switches and network cards) are also upgraded to match the new cabling system. If the switches and network cards are not upgraded, your network will operate at the slowest device’s speed. So, immediately upgrading the switch is critical. And as you also upgrade the network cards, full speeds will be realized.

Recommended Solution: Cat6a because it is the safest choice that gives 10-Gigabit speeds and an easier migration path.